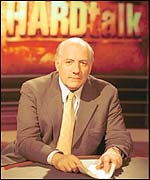 I've finally managed to see the interview that Tim Sebastian had with Syed Hamid Albar, the current Malaysian Minister for foreign affairs, on HardTalk (courtesy of Jeff Ooi's link to the RealVideo on BBC). Overall, I thought it was a fair-ish performance, although it would have been far better if Syed Hamid had more prepared for some of the topics. I don't know whether they get a heads-up on what will be discussed, but I would have thought that the ISA would have been an obvious one.

I reproduce below transcripts from two sections on the interview. The first is about the ISA and the second is on refugees being turned back. I actually have lots to say about the ISA section of the interview, but I'll leave the details for another posting. What piqued me were the statements that (a) Cogent evidence is needed before people are held under ISA and that (b) You can only bring people to court for normal crimes - the ISA is for 'other' crimes. You can also add the throwaway comment that "prevention is better than cure" as another one I have something to say about.

Tim Sebastian: Your Internal Security Act is singled out for particular attention. The accusation is that it's used as a means of taking out your politcal opponents. How do you reply to that?

Syed Hamid Albar: My response is very simple. People who do not understand Malaysian political system may, you know, just simply criticise us and say it is getting rid of the opponent. We have elections every four or five years and the opposition have won two states in Malaysia. we have-

TS: The opposition has said you've arrested some of their members on the Internal Security Act but you haven't put them on trial.

SHA: We arrested them, the same way with the Patriot Act, the same way that you're dealing with terrorists act, if they support overthrowing of government through illegitimate means or unlawful means, of course we'll arrest them.

SHA: (unclear)... even in the case - prevention is better than cure, you know, we have taken-

TS: The PAS, the islamic opposition party, say that if you have any evidence against their members, bring them to court

SHA: I think it's the same thing now what we have done now, the terrorist activities, what we have focused on, we do not just simply arrest opposition leaders because they are opposition, we can handle them very well, there is no problem on that.

TS: It's a bit of a coincidence though, isn't it, that the ones who are detained-

SHA: You look at Guatanamo Bay question, there is a lot of coincidence there, a lot of denials of human rights. If you look at UK case of arrest of -

TS: We're looking at Malaysia though... (unclear) we raise these questions with Washington, I'm now raising about Malaysia with you.

SHA: I think this shows that you have not studied nor understand-

TS: This is the Human Rights Watch-

SHA: The Human Rights Watch cannot be gospel in everything that they say. There are a lot of report, a lot of reports on human rights about other countries, but in this particular case, there is just not on mere suspicion, there must be cogent evidence for them to show that they are involved in subversive activities that can threaten the security of the country and we put and place great importance on peace and stability here in Malaysia.

TS: I come back to you to that point, if you have evidence then why not put them before a court?

SHA: No, if they commit the normal crimes, then you can bring them to court. If they've commited, say, our KMM or our group that is called Al-Maunnah involved in overthrowing the government, we charge them in court. But when people do subversive activities then this is the law that we inherited-

TS: So you just detain them indefinitely-

SHA: Not indefinitely, that is not true. There is a two-year period at the initial stage and it is subject to review. And the review is done by very independent people. If they think that within the two years these people can be released, then they can be released.

SHA: THey're very independent, they have nothing to do with the government. Judges, there are judges inside it, there are people who are responsible at looking whether the detention of this person would serve the interests of the country or not.

The other part which I found interesting was on accusations that Malaysia is turning back Indonesian refugees.

Timestamp: 18:37 - 20:52
TS: Why are you turning away refugees, arresting refugees, who are fleeing the violence in Acheh province?

TS: Despite protests from the UNHCR, the refugee agency, why are they being turned away?

TS: You say they're not refugees. UNHCR says they are refugees.

SHA: You hold on, if I can explain the situation. What they have done is, we have over 1 million illegal immigrants into this country, people who are, who are working without proper documents. These people, is part of an on-going process of making sure that we arrest illegal people who have no documents, about two hundred of them were arrested in this country without any documents.

SHA: Then they are-

TS: Were arrested on their way to the UNHCR office.

TS: But you are throwing them back before you could investigate (unclear)

SHA: They are still with us under detention, on investigation. We haven't thrown anybody back yet.

TS: Have you arrested them? Why can't (unclear) Why can't you leave it to UNHCR to do it?

SHA: No, no. Because they came as (unclear). If the UNHCR say they are refugees then they have to prove that to us. In this one we have arrested them, then the UNHCR then decided these people are refugees. We do not act in that way. We do not do that. We have to act in accordance with our own law.

TS: There is a right to asylum that is contained in the Universal declaration of Human Rights, isn't there?